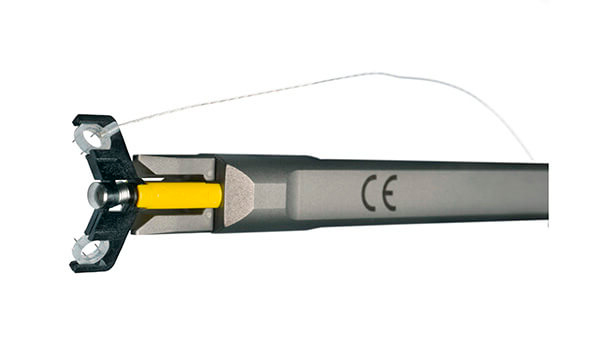 Peace of Mind You Can Hear™

The GEM™ FLOW COUPLER® Device and System is the marriage of two trusted technologies: The GEM™ COUPLER™ and a 20 MHz ultrasonic Doppler. The FLOW COUPLER has been specifically designed for use in end-to-end anastomosis for the detection of blood flow in order to confirm vessel patency intra- and postoperatively at the anastomotic site.

Alignment of the probe and accurate monitoring of the velles, reduction noise and interference of adjucent vessels. The fully insulated silver-coated copper coaxial lead wire is less sensitive to noise and signal interference. Loss of an audible signal alerts staff that a potential problem with perfusion may exist.

Monitoring of the outflow vein of the flap will detect cessation of venous flow almost immediately. Interruption of arterial flow will cause a near-immediate loss of the venous Doppler signal. Venous monitoring clearly offers a distinct advantage over arterial monitoring with regard to detecting venous thrombosis and simultaneously serves as a monitor of arterial flow.

Timing of presentation of flap compromise is a significant predictor in flap salvage rates. Intensive monitoring in the initial postoperative period by the clinician leads to early re-exploration and more likely repair.

** Rx Only. See instructions for use for indications, warnings, precautions, side effects and contraindications.

Please see important safety information in the Instructions For Use located in the enclosed files below:

“Factors Associated with Anastomotic Failure after Microvascular Reconstruction of the Breast”

“A Prospective Study of Microvascular Free-Flap Surgery and Outcome”

Call us or use the form below